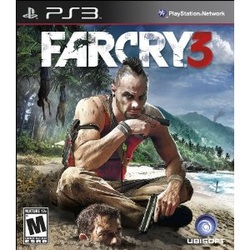 Far Cry 3 can be described easily as Skyrim with guns, which to me is simply amazing.  You start the game locked up in a cage with your brother, clearly taken by psychos while you were partying on the island with your brother and some friends, including your girlfriend.  In the beginning, you are depicted as the baby, your brother as a strong fighter, as he devises the brilliant plan to get you two out of the camp and escape certain death.  However, during your escape, you are caught again, and your brother murdered in front of you, and while this may seem the end for your life as well, you are given the opportunity to run.  Right away this opening sequence has you running, fearing your life and also getting your first kill which can shock you, but you are doing what you can to get away from the islanders.  Eventually you jump off a waterfall, passing out immediately.  The next time you wake up, you find yourself getting a tattoo by a guy you have never met before, a tattoo that you learn has certain powers embedded in it that will act as a skill tree during your quest to find your friends.
The fact that your tattoo is basically a skill tree isn't why I said this is Skyrim with guns. The reasoning for that analogy is because this island you're on is about equally as large as the map in Skyrim as well as not only are you dealing with the kidnappers of your friends, you also have to deal with wildlife such as rabid dogs, bears, tigers, etc.  This makes you constantly think of your surrounds and approach enemy camps only after searching the surrounding area to make sure there aren't any tigers or bears trying to sneak up on you, the last thing you want is to be creeping up in the bushes only to be ambushed and given away by said animal. During your pursuit of Vaas, you begun to learn that he may just not be the only one involved with your crew being kidnapped, especially when you come across some undercover United States agents. They begin to show you that Vaas is actually working under a criminal mastermind name,end Hoyt, of which kidnaps people and sells them on the black market.

Once you learn that Hoyt is behind everything, your objective to get your friends back becomes deeper and now you begin to form a vengeance to kill Hoyt for ruining your life. When you started the game, you were on Rook Island, but once you learn about Hoyt, you go on a psychedelic trip and end up killing Vaas. From there, one of the undercover agents flies you to Hoyt's island to aid you in taking him down. The way that Ubisoft changed the plot of this game was very seamless, and it all tied in with your original storyline, which is one of the reasons I just love Ubisoft, they put so much into their stories, making your investment well worth it. As far as graphics and frame rates, I don't recall ever having problems with frame rates dropping or horrible texture popping, although I will say that sometimes the positions dead enemies end up in can seem funny, but also may be texture issues, but its so funny that you just don't care. After all, when you see a dead pirate cuddling with a dead bear, who wouldn't just be amused by that?
Throughout the game, you unlock more and more weapons and hone your skills. One big word of advice is don't buy the stock guns! Just go around unlocking as many radio towers as quick as you can, as with every tower you activate, you will get free guns and items from the stores. One set of weapons you don't get for free is the signature weapons, which are the best weapons to own, and the accessories for every gun are not free, just save your money on the stock guns, you will get them for free. There are numerous side quests that will often deter you from the main story quests, but they can be lengthy enough to definitely make it worth playing them as you come across them, especially taking over enemy camps, those are some of the best missions.
When you come across an enemy camp, it takes time to strategize what you are going to do to overtake it, especially as you get more xp for being able to clear out a base undetected or without setting off an alarm. Once you take over a camp, you will be able to fast travel to that base as well as access to the portable store to purchase upgrades. Fast travel on the island comes in handy, but sometimes it is just a blast to jump in one of the many different vehicles and just cruise around the island and take in the beauty of it, just watch out for the wildlife! Overall, this game has such an expansive single player, that you can invest hours upon hours of your time losing yourself in this world.
Far Cry 3 also has a multiplayer and a co-op mode. I have not had a chance to play through multiplayer, but I have done co-op missions, and those are a blast. It is strongly advised to play with a group of four, be it with four friends or four strangers.  The way its setup is you have objectives to complete, while waves of pirates come in, so it makes it very tense for everyone, but holds up its own storyline very well. For me, this co-op is the best co-op experience I have had since playing Left 4 Dead 2. Although it has been fun, I do think that it was a last minute thing to include multiplayer and co-op, which I don't usually like, but the story is strong enough in single player to still make this game well worth the money.
Score: 9.5/10 Great storyline that will last hours upon hours, lacking multiplayer, but great co-op.