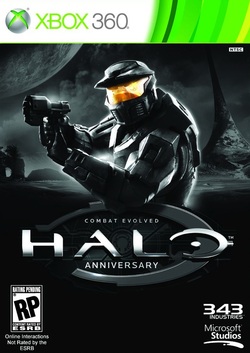 I have a confession to make. I wasn't an immediate fan of Halo. The closest thing I had to a console growing up was a commodore 64 with an Atari attachment. I also never really liked first person shooters. Racing games were the games for me, Need For Speed was the franchise of choice. In the spring of 2002 I started hearing about this game, Halo. I didn't really pay much attention to it at the time since A it was for the Xbox, and B it was a shooter; but then I played it. I was over at a friends house and he said I had to give it a try. We sat down in front of his tv and he loaded up beaver creek. My eyes were opened and the spark of curiosity was lit. Eventually we ended up playing the first few levels of campaign on legendary co-op, and that's when I knew I had to have this game. Lucky me gearbox ported the title over for PC use and I had my way in. The rest, as they say, is history.

Halo:Combat Evolved: Anniversary Edition is a true swan song to a game that changed the way consoles were viewed. Halo:CE paved the way for what would become one of the most popular, certainly the most iconic, shooters of the past decade. The Anniversary Edition goes beyond simple uprezing of textures or increase in polygon count. The only thing left largely un-touched is the game engine itself. All the visual assets have been redone to reflect modern expectations of polygon counts and texture density. Since both the original and "remastered" graphics are running on the same engine you can switch between the two on the fly with a simple tap of the back button. It takes a moment to switch between the two. The only limitation is you can't swap graphics while cut scenes are playing. This may be because there are slightly different animation cycles during the cut scenes. It's most noticeable during the first cut-scene when the soldiers are lining up. In the original the soldiers legs stop apart and then slide together. In the remastered version the soldiers feet come together normally and do a small step with one foot. A much more natural motion to be sure. In addition the new character models closely resemble the Reach models. Even though the models are upgraded, they are still bound by the original player skeletons so the animations can sometimes cause them to look... abnormal; particularly in the face department. It's not a deal breaker, but it does remind you that you are playing a 10 year old game with a facelift.

As far as gameplay goes it's the same as the original. If you haven't played Halo:CE before, the game will feel strikingly dated. For those of you whose first Halo was CE, it's like going home. Your pistol is your friend, frag grenades are devastating, jumping is lofty, and the Warthog is the best tail happy off roader ever. As a seasoned Halo player it took a bit to get used to the new graphics. The engine could have used one or two small tweaks to really spruce up the game. I found myself missing being able to swap weapons with NPC's, jack enemy vehicles, and have a more accurate melee. Those three points aside everything is there, and everything is awesome.

The remastering didn't stop with just the visuals. The entire score was re-recorded. The original is included as well, and switches with the graphics if you use the back button. Wonderfully the graphics and the audio are not tied together. So if you prefer the new graphics, but want the original score (or vice versa) there is nothing stopping you. The Remastered Score sounds wonderful in all of it's modern recording equipment glory, but the musicality is a little different. If you were looking for a textbook re-recording you will have to look elsewhere. Not all of the notes are held for the same length, and some of the syncopation is different. It's not bad per se... but it is a bit jarring at first if you were used to the original. Like the soundtrack the sound effects were re-recorded as well. All of the hits, clicks, bumps, slaps and blasts are all fresh and new. The frag grenades sound like the mini-nukes they are; plasma fire sizzles and pops; vehicles ruble and whirr; and weapon changes sound smooth and efficient.

The world of Halo is as vibrant as ever thanks to the updated graphics and sound. In addition to this visual and audio upgrade, a couple of Halo staples have been seamlessly integrated: Terminals and Skulls. Terminals are handled a-la ODST with them telling a more or less linear back story following 343 Guilty Spark. The activation points can be hard to spot because they are not always the same shape or size like in games past. Regardless, you quickly learn what to look for. Skulls are handled just like in Halo 3. They are hidden around each of the campaign maps in backwater out of the way places that most will need a guide showing how to get. 343 took the opportunity to test out some different skulls, and I think they are for the better. The classics like Iron, blind, and IWHBYD (but a dog beat me over the fence) are there, but they have some new ones in the mix: Malfunction causes a random HUD element to be disabled every time you respawn; Recession causes every shot fired to cost twice the ammo; And Eye Patch, which removes all of the in game aim assist, a challenging skull indeed for console players.

The only let down is the multiplayer. I had assumed that the multiplayer was fully integrated into the Reach community, but it's not. If you have just the Anniversary disc you can only play in the Anniversary playlists. While still fun, it's not the complete multiplayer experience like what you got with ODST. However, the game does come with a code to download the maps from the Xbox Marketplace for use with Halo Reach. So if you already have Reach you don't need to buy the maps again. All the additional maps are wonderfully made and still play nearly as well as the originals.

All in all it's a wonderful trip down nostalgia lane, giving you everything you remember and more.

Overall Rating: 8/10
As a general game, Halo still holds up, but being restricted to just the Anniversary Playlists is a bit limiting.

Series Fan Rating: 9.5/10
If you are a fan of Halo this needs to be on your wish list. It's worth it just for the updated graphics.