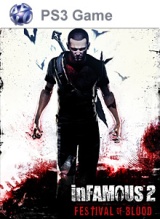 Infamous: Festival Of Blood is a "DLC" stand alone game from Sucker Punch. This game is available on PSN for $9.99 and definitely makes it worth the money, albeit the story for this game is very short lived and pretty dull. You start out the story with Zeke in a bar talking to a woman, trying to impress her with a story about Cole and him in New Marais  during Pyre festival and a queen vampire named Bloody Mary. Cole is bitten by Bloody Mary and turned into a vampire. He only has until sunrise to save new Marias and defeat Bloody Mary. The storyline on this game is very short for Infamous, only being about 2 hours long if you avoid trying to trophy collect. The biggest downfalls of this game are the bland story and you cannot choose between good and evil Cole like you can in the other two Infamous games. You need to bite the citizens of new Marais in order to survive, and go through various missions that help reveal the story behind Bloody Mary leading up to the final boss battle with her. 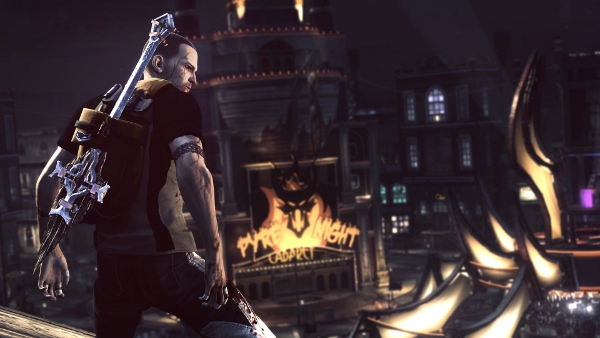 Vampire Cole
To me, this game was very easy on any of the difficulties, and frankly, sometimes annoying when vampires swarm out of nowhere and bog you down, forcing you to shock wave them all away from you just to get a breath in.  When you first start out, you learn that you have to feed on the locals in order to stay alive and make it to defeat Bloody Mary, which seems cool at first, but can get annoying over time when you are trying to get somewhere but need to stop and feed on someone just so you can keep going to your next destination.  Now you can increase the flight time by wandering around New Marias looking for jars of blood and destroying them, this will increase the amount of blood you can store in your body, giving you more flying time when you morph into a swarm of bats, in which is a first for Cole, being able to fly. Another first for him is called Vampire Vision. Vampire Vision allows Cole to be able to separate a "Newborn" from a normal citizen, see image for see how it looks. Vampire Vision was really fun to use, however, I did not like how you constantly had to hold down R2 to be able to use it, I wish there would have been an option to press R2 to toggle it on and off, that would have made the game much more enjoyable when I was trophy hunting for Newborns to stake. The game definitely follows suite with the rest of the Infamous series where your map is open world, your not on a time limit to get to your next objective, and there is always plenty to do, including User Generated Content to play. To me, the story and the ending to it was very plain and very by the book for a vampire story, so that part was not impressive, however, it was still a lot of fun to run around New Marias trophy hunting. 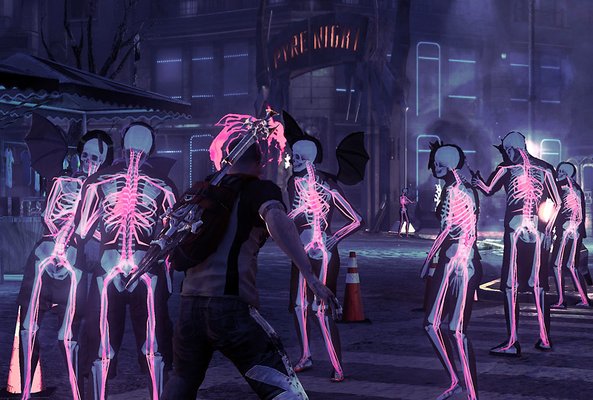 All New Vampire Vision
As you progress through the story, you will begin to learn a lot about Bloody Mary and how she became a viscous vampire hell bent on turning everyone in New Marias into a vampire by sunrise, and it is your goal to stop her before then. To me, the story behind how she became a vampire did not make sense, and seemed like it was all over the place, leaving a lot of details out and having me guessing the real past behind the story. At the same time though, you have to keep reminding yourself that it is actually Zeke telling the story to a lady in the bar, so a lot of it is him making it up as he goes along. As well as the storyline not really making sense, some of the primary objectives didn't make sense either. For example, there was a mission where Cole needed to free a few groups of citizens that were locked in cages, but then after the mission was complete, I found myself just biting them for the blood anyways, so what was the point in rescuing them? Graphically speaking, this game was top notch, you can tell that Sucker Punch put in the same amount of detail in it as with Infamous 1 and 2.  For only $9.99,  I was thinking that the graphics would be second rate, and that there would be hardly anything to do, but the map, while small, is still very much open for exploration and I still need to go back and completely explore everything. 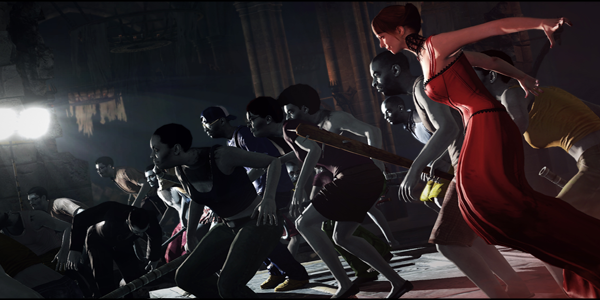 Bloody Mary and an onslought of newborns
All in all, I was very impressed with Sucker Punch for making this a somewhat solid stand alone game, although I would have been willing to pay more if they had a bigger map or a choice between good and evil. If you were a fan of the series, this is definitely a must, or if you have a spare ten bucks laying around, you will thoroughly enjoy this game.