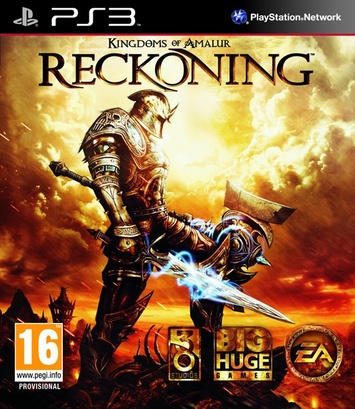 When I think of what makes a game perfect, a number of things come to mind.  First, it needs to have a deep story.  If I'm drowning in plot, there's a good chance this is a game I'll like.  The second thing I look for is a well thought out world.  Every last crumbling ruin should have some sort of history, or at least a story behind it.  Last, but not least, I like a game with smooth flowing, easily grasped mechanics.  None of this hold L2, push up on the D-Pad and push Triangle and Square at the same time just to swing a sword (actually, I've never seen a game with those exact mechanics, but if you find one I'll give you mad props).

There is a new game on the horizon that just may be able to meet all three of these criteria.  That game is called Kingdoms of Amalur: Reckoning, which is a pretty awesome title by all standards. Kingdoms of Amalur is a new franchise which originally began its development cycle with 38 Studios, and somehow ended up in the hands of Big Huge Games.  You may be wondering how this little title, being developed by a studio you've never heard of, is beginning to crop up on a lot of people's list of games to watch in 2012.  Kingdoms of Amalur: Reckoning is being written by New York Times bestselling author, R. A. Salvatore.  The game is being lauded as having 10,000 years of history packed into this open world RPG.  This alone is exciting news for any RPG fan, or gamer who simply loves a very deep story to delve into.

Since this is a preview, I'm going to go into the gameplay a bit. Don't worry, this preview is going to be fairly spoiler free only covering some minor plot points from the intro.  However, if you're a purist get out of here since this preview will clearly be talking about the game from the point of view of someone who's played a bit of it.

The basic premise for the game is simple, yet so complex.  Your character is brought back from the dead by a machine called "The Well of Souls".  You have no memory of your past life.  You don't recognize your friends, you don't know anything about the land your in, and you have no idea how you died.  There is a huge war going on so that might have something to do with it, but you set off in search for answers nonetheless.

There are 4 basic classes to choose your character from: Almain, Varani, Ljosalfar, and Dokkalfar.  They represent your basic Warrior, Pirate, Alchemist, and Sorcerer classes respectively.  The Almain and Varani are humans, while the Ljosalfar and Dokkalfar resemble elves. Of course there are male and female variants of all races.  The character creation has some depth remeniscent of those in Mass Effect and Skyrim, which is a nice bonus since Kingdoms of Amalur is played in third person view.  If you have to look at your character for the next 300 hours, it's nice to have some control over what he or she looks like.

The game controls like your typical action rpg.  Things you can interact with light up with a sparkly effect so you don't miss them, which is a nice touch.  The menus are fairly straight forward and easily accessed with a press of the pause button.  The basic mechanics are thoroughly introduced in the beginning dungeon, and are quite simple to pick up.  One button slashes your sword, while a pull of R1/RB switches the face buttons to your spells.  You can whip out your shield at any time with a simple pull of L1/LB, and your secondary weapon is instantly accessed with a tap of Triangle or Y.  It's so easy to string attacks together: start with swinging your sword, roll back and fire off an ice spell to freeze your enemy, and finish them off with a shot from your bow.  The system is so smooth that level grinding no longer feels like a chore.


When all is said and done, Kingdoms of Amalur: Reckoning is an excellent game that is going to surprise a lot of gamers in a week.  Release date is 7 February 2012.  If you're a fan of western RPGs, a preorder will not leave you disappointed.  Look for my full review in about a month once I'm able to fully beat the game.  Until then, keep on gaming!