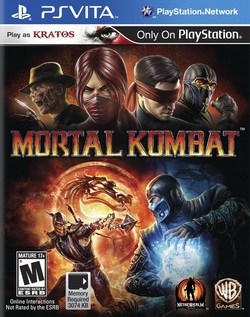 I'll be the first to admit I'm terrible at fighting games.  I bought BlazBlue Continuum Shift Extend on Vita the day it was released and was absolutely terrible at it.  I really love the idea of being able to pull off insanely cool looking combos, but lack the skill and timing to imput the precise button combos in complicated games like BlazBlue.  The last fighting game I was genuinely good at was Mortal Kombat on the Super Nintendo Entertainment System.  The combos could all be done by memorizing simple directional button presses (none of this weird downward half-circle then back analog shit that I still can't seem to pull off).  I was intrigued when Mortal Kombat was released on PlayStation 3 and Xbox 360 last year, but I wasn't about to pay $60 for a genre I generally tend to avoid.  There were just too many other games I'd rather play on these systems to merit buying a brand new fighting game that I may not really enjoy.  Enter the PlayStation Vita.

The PlayStation Vita was released about two months ago.  Since then, I have managed to play every game I was interested in up until now.  There is about a month left until the release of Resistance Burning Skies, so I decided to check out this new portable version of Mortal Kombat I've been hearing so much about.  I was skeptical at first.  The last fighting game I played was way too hard for me on normal mode, and way too easy on beginner.  I wanted to be able to pull off the insane combos on my own, but couldn't without the computer opponents having the reaction time of a moldy banana.  If my opponent wasn't just standing still, there was no way I was going to be able to beat them into a spectacular bloody pulp the way I wanted.  Mortal Kombat is the complete opposite.

Mortal Kombat plays exactly the same way I remember from the Super Nintendo version.  Spectacular combos and special attacks are all pulled off through simple directional imputs on the d-pad, accompanied by one of four face button presses.  Each face button represents a different body part used for attacking.  Square and Triangle are used for right and left arm punches, while X and circle are used for right and left kicks.  These attacks can be modified by adding a simple directional press right before the hit.  For example, pressing down then triangle results in a nice uppercut.  These attacks can be further modified into special combo attacks.  Down, back, triangle while playing as smoke results in him throwing a smoke grenade at your opponent, teleporting them to the top of the stage and dropping them to the floor.  The combos don't end here though.  If you hold the block button at the same time you begin your combo, you can use some of your special gauge to further strengthen the attack and deal even more damage to your opponent.  Fatalities are also fairly easy to pull off.  Down, down, backward, forward, x will make Kratos cut his opponent in half, and is quite simple to remember.  The controls work so well, I have no problem playing this game on normal mode.  The opponents are difficult, but I can pull off the attacks well enough that I am guaranteed to win after a few rounds.

While the controls make this a very fun fighting game to play, that isn't all there is to this masterpiece.  There is a full story mode to play that goes through the events of Mortal Kombat 1-3 in fully voiced and acted cut-scenes.  The cut-scenes look very good.  The graphics are almost up to par with what you'd expect from a PlayStation 3 game.  There are a few v-sync issues, but the screen tearing is only minor.  The story itself is everything you could possibly want from a Mortal Kombat game.  It gives the characters a reason to be fighting in this tournament, so they can save earth realm and all of humanity.  The voice acting is some of the best I've ever heard.  AAA titles like God of War and Uncharted are the only games that have an equally talented roster of actors.  Johnny Cage quickly became my favorite character, providing plenty of comic relief with his arrogant movie star personality.  Emperor Shao Kahn of Outworld comes across as a truly evil dude, while you can be certain that Raiden is genuinely concerned with the protection of Earth Realm.  The acting is so good and the story is so well written that this mode alone makes the purchase of this game worth it.  Don't worry though, there is much more included in this little cartridge than just story mode.

Mortal Kombat on Vita is completely packed with content.  In addition to story mode, there are the Fight modes.  These are here for when you just want to fight some AI opponents without the story elements to bog you down.  The Fight modes include Ladder and Tag Ladder, where you choose a character to fight to the top of a 10 opponent ladder.  Then there are a series of minigame modes you unlock in the challenge tower: Test Your Balance, Test Your Slice, Test Your Luck, Test Your Might, Test Your Sight, and Test Your Strike.  Out of all these my favorite is Test Your Luck.  In this mode you are given a series of 2-7 slot machine style wheels where your opponent and several game modifiers are randomly chosen.  This mixes up the game nicely, especially when you get something like zombie players and exploding bodies selected in the same round.  Versus is the menu where you access online play over either wi-fi or ad-hoc (fair warning, the people who play online are ninjas of the fighting genre. I can't even win half of my matches).  There are also two challenge towers, the original one from the console version of the game and a brand new Bonus Challenge Tower that contains all new Vita exclusive challenges.  The Bonus Challenge Tower is by far my favorite.  Challenges range from surviving waves of missile attacks by taping them as they fly at you, to swiping blood splatters off the screen to restore health while you fight your opponent.  Completing these challenges adds kurrency and unlocks classic character outfits for use in most of the game modes.

Now, you might be thinking 'what motivation do I have to play through the challenge towers and the fight modes when I can get an awesome game out of the story alone'?  That motivation comes in the form of the in game monetary system.  Everything you do in the game earns you these little coins called kurrency.  The reason for collecting all of this is to unlock extras in the Krypt.  You can wander around the Krypt and spend kurrency to blast apart graves, and chop off heads.  Doing this earns you a myriad of rewards including character art, concept art, in game music, costumes, and kombat kodes.  The art and music can all be viewed in the necropolis, but costumes and kombat kodes are used  in the various game modes.  When I say there is a myriad of unlockables, I really mean it.  The first time I visited the Krypt I spent all of the kurrency I earned after playing through the story mode, (is it just me or is it getting really annoying to type all of these stupid 'k' words) and didn't even get through ten percent of what was there to unlock.

Final Score: 9/10  Nearly perfect!  Only marred by some minor graphical glitches that could probably have been fixed.