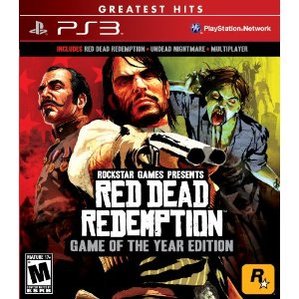 Red Dead Redemption is the latest open world game by Rockstar.  The last open world game that they made was Grand Theft Auto series.  Unlike that series, this is an open world Western style game, one that has never been done before.  You play as John Marston, a lonely cowboy who's wife was taken from him and he will stop at nothing to get her back.  As much as this is an adventure game, I would classify it more as a third person shooter.  Personally , I didn't think a western game would be fun, but I kept an open mind going into it, and I am glad I did. this feels nothing like a boring western would feel.  You have the entire vast desert to explore, but you also have the dangers of the wilderness to battle as your moving along.

As you take the journey to get your family back, you will encounter people in the cities that would like your help. this opens the game up to tons of side quests for you to participate in to level up John and earn more money and trust among the towns people.  Now in the Wild West, there are pretty much no rules out in the desert, so of you want to lasso up someone and drag them behind your horse, go right on ahead, just don't get caught, or you will have a bounty out for your capture or death. if this ever happens to you, out can either pay off your bounty, or get captured unarmed and serve your time. If traveling by horse across the entire desert isn't your thing, Rockstar put in the option of a fast travel of sorts, usually to specific towns. however, if you want to get to your objective faster, just mark a custom waypoint on your map, build your campfire and select to travel to your waypoint you set up. For me, it was a relief knowing when my objective is on the furthest end of the map, I could just build a fire and fast travel to the other side of the map.

Now I know this review has been very vague and only talking about gameplay styles, but that is because any missions I talk about will spoil this game for you, and this is an experience everyone should have in their gaming life. what I will tell you is that if you don't have this already, get the Game Of The Year edition and you will get Undead Nightmare expansion.  Undead Nightmare is like Red Dead on zombie steroids, and could be considered a stand alone game with as much content it holds, as well as its own storyline.

If playing with your friends is your thing, Rockstar has also done the best at accommendating your needs.  The game is still open world, your friends can join you in free roaming the map, while having the ability to complete in online matches. The only problem I encountered when testing the multiplayer was simply that anyone can walk up and shoot you and kill you. While this got frustrating at times, I can understand why Rockstar did that, because it keeps to the true Wild West feeling that its every man for himself.

Read Dead Redemption has got great replay value as well. I finished the main story and I still have a good chunk of side quest to do in order to fully complete this game. There is also the opportunity to play the story again, there are different ways you can play John Marston, evil or good.

Score: 9.5/10 For excellent replay and a gripping story, definitely a must have!