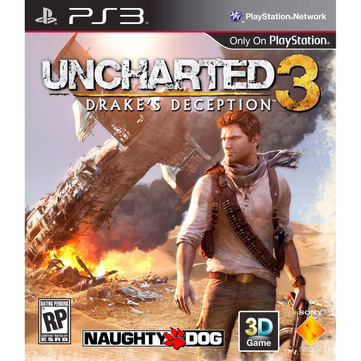 Uncharted 3: Drake’s Deception is the definition of entertainment.  I was glued to my TV completely through the roughly 14 hour campaign (about half as long if you're not hunting down those gleaming treasures) from an intense bar fight in the beginning until the credits rolled across the screen in the end.  Words like “cinematic” and “epic” are often used to describe how Nathan Drake’s adventures in the video game world play out almost like a movie.  But you have to remember Uncharted is an interactive experience, it’s so much more than a movie.  Uncharted 3 joins a select few games on my list as one of the best games ever made. This game has it all: an awesome story, jaw dropping graphics and animations, and some of the best voice acting to grace the gaming world.
Uncharted 3 picks up just a few years after the events in Among Thieves.  The story of course is able to stand on it’s own, although if you were to skip straight to Uncharted 3 first you would be missing out on a lot of character development (not to mention two more incredibly fun games).  It’s difficult to describe the story without it sounding very similar to the plot of the previous two games.  In Drakes Deception, Nathan Drake uncovers the existence of Iram of the Pillars, a city of incredible wealth and treasure.  As usual, a group of bad guys finds out about this city and Drake must join up with his comrades to beat these baddies to the treasure.  Although this sounds very similar to the plot of Among Thieves, the story is still as exhilarating as ever with plenty of twists along the way.  While the general idea is the same, the story itself is still completely different, if that makes sense.
Uncharted 3 is one of those rare games where you find yourself actually caring about the characters.  Tears actually began to form in my eyes when Drake was left alone and thought all was lost.  This is due to truly excellent character development, amazing voice acting by the entire cast (including the almost god-like Nolan North), and graphics that are nearly flawless.  You find yourself getting so absorbed into the game, you almost forget you’re playing.  Drake’s expressions and voice are so well done you it’s easy to think of him as a real person instead of a video game character.  This is the true mark of a brilliant game. 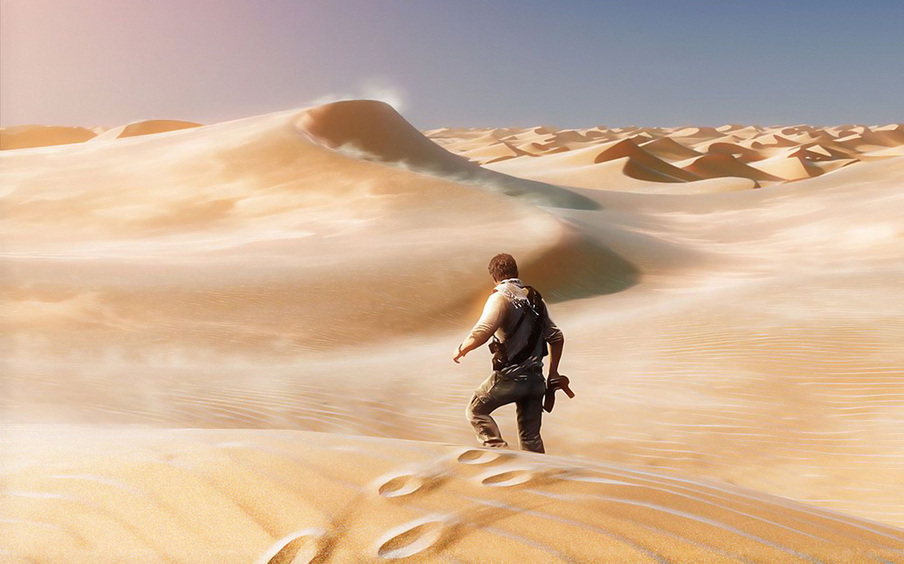 I'd Feel Hopeless Too If I Was In That Situation

Everything about this game feels slightly familiar to the previous one, however everything also feels very much improved.  The gameplay is pretty much the same as all the other entries in the series.  There is a nice mix of platforming, gunplay, and puzzles (sometimes with all three at the same time!).  The biggest improvement in gameplay is the hand to hand combat.  The melee combat now feels very similar to that in Batman: Arkham Asylum.  Drake can attack enemies with one button, and dodge and counter attacks with another.  It’s actually fun to run into a group of enemies now and simply attack with your hands.  It puts a smile on my face every time I see Drake do something different to take down his enemies, from hitting them over the head with a nearby object, to grabbing their gun out of their hands and beating them in the face with it.  Everything seems to just flow together much more smoothly than in the previous games.
When you first start up the single player mode campaign in Drake’s Deception, the first thing you’ll notice is the improvement in the visuals.  While they are still top notch, developer Naughty Dog managed to add even more textures to the already eye popping environments.  Water seems so much more fluid, fire actually seems like it could spread anywhere at any time, even the sand feels and acts exactly how you’d expect it to in real life.  You’ll also notice Nathan Drake interacts with his environment a little more than in previous titles.  When you approach fire he’ll shield his face. As you run near a wall he may put his hand up to keep him from smacking into it, or simply put his hand on a door frame as he’s walking through to steady himself.  The animations all seem very natural.
As I mentioned earlier, cinematic is one word that can be used to describe Uncharted 3.  While most games may use cinematic only to describe cutscenes, you can use the same word to describe the actual gameplay in Uncharted games.  The camera moves around to provide dramatic angles and add to the emotion of the scene.  The best example of this is when the camera zooms way out as you make your way across the desert to show just how alone Drake is in this massive wasteland.  The gameplay is so well animated, it’s often easy to mistake gameplay for a cutscene (until you start to die because Drake is just standing there getting beat on). 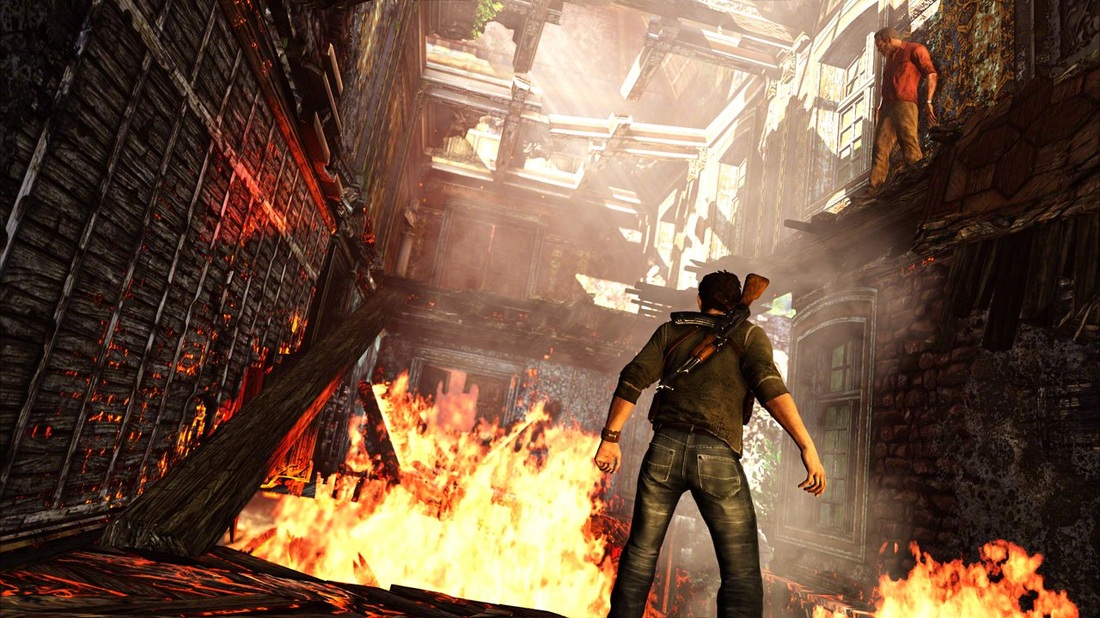 Look at the Embers Crawling Up the Walls!

The musical score in this game adds even more to the emotional level of the environments and acting.  Although there’s nothing extremely memorable, everything just seems to fit into place to provide the perfect emotion in the background of any scene.  The voice acting in the Uncharted games is also way above the norm set in similar action-adventure titles.  Nolan North fits perfectly in the role of the always charming and humorous Nathan Drake.  Richard McGonagle’s rugged sounding voice is perfect for Drake’s seasoned adventurer companion, Victor Sullivan.  Even the actors that just play random thugs sound very convincing.
While I’m sure almost everyone buys the Uncharted games for their spectacular single player mode, it’s important to note that Naughty Dog has been working on adding an engaging multiplayer mode as well.  Among Thieves was the first Uncharted game to have a multiplayer mode, and it was fairly well done.  However it got boring very quickly as there wasn’t very much variety to it.  Drake’s Deception has improved upon the previous version in almost every way. 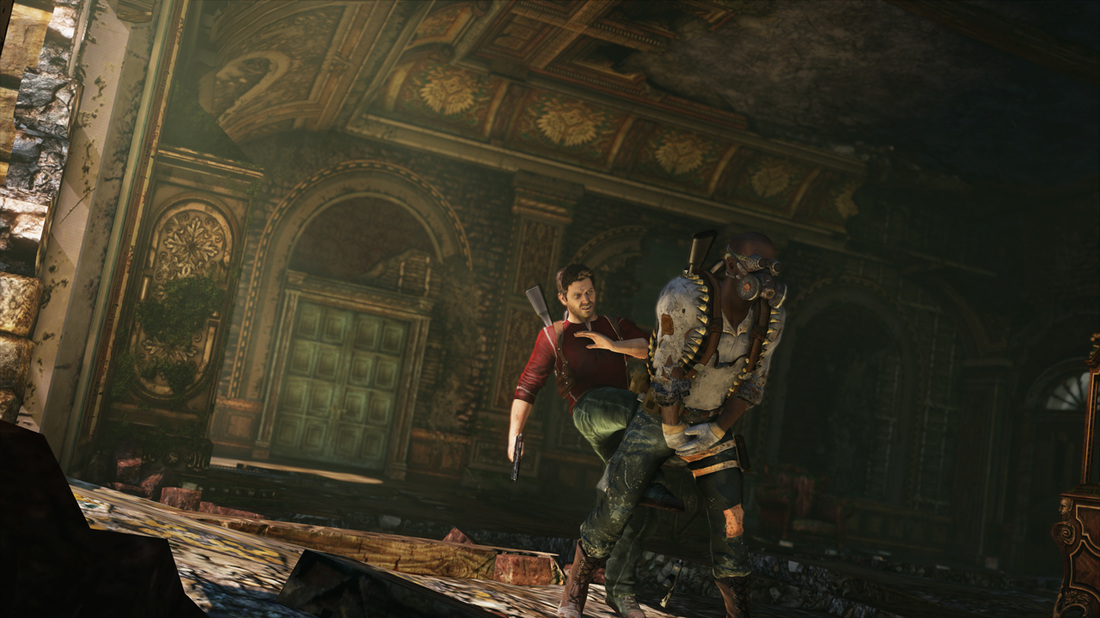 The multiplayer in Uncharted 3 consists of several different game modes.  It has the standard “Team Deathmatch”, “Plunder”, and several “co-op” modes.  Team Deathmatch is exactly what it sounds like.  There are two teams: the heroes and the villains, who battle until one of the two sides kills the most and wins.  There are several variations of this mode, including Three Team Deathmatch, to keep things fresh and interesting.  Then there is Plunder mode, where the goal is to collect treasure and bring it back to your goal area.  It feels a little like capture the flag, but it’s still an interesting diversion from the standard Deathmatch.
Lastly, but most interesting, there is the co-op mode.  There are several different co-op options including a survival mode where waves of enemies come at you and your team, and an adventure mode.  The adventure co-op provides a story, where you and two of your friends can battle through several maps trying to accomplish some sort of goal at the end of the level.  I found this pretty entertaining, but it does contain some level spoilers for the main single player game, so make sure you play through that one before you tackle the multiplayer version.
With one of the best stories, some of the graphics in any action game to date, and a solid multiplayer mode, Uncharted 3 is by far one of the best games of this console generation. If you haven’t played any Uncharted games before, I strongly suggest you play through the entire series so you can experience these heart pounding adventures.  Now we just have to wait a few more months until Uncharted: Golden Abyss comes out on the Playstation Vita!

Overall Rating: 9.5/10
Replay Value: Multiplayer Will Keep You Coming Back