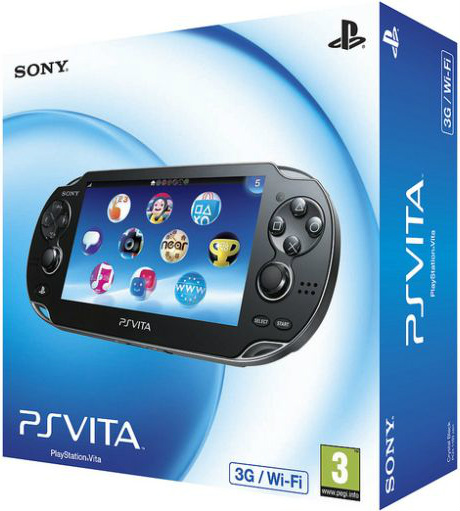 In this section we are going to be providing you guys with the most up to date news that we can find as it is revealed online by various sources, some being PlayStation itself. Enjoy

Motorstorm RC Free on the Vita!

Head over to the PlayStation store right now to pick up the Vita version of Motorstorm RC right now for free.  This game has received high praise from many reviewers, and is currently FREE for a limited time.  There's absolutely no reason to not go get this right now (other than the servers being a little slow right now).

I've compiled a list of all the current Vita launch titles, their prices according to Gamestop, and their scores on Metacritic.  Click here for the list and enjoy!

Sony has just announced that it will finally put in some money on marketing, $50 Million to be exact, and it will be used to market the Vita. There campaign slogan will be 'Never Stop Playing', because as we all know, the Vita is designed to basically take your PS3 with you on the go and always have that beautiful HD experience anytime, anywhere, also have social media at your finger tips, bye-bye mobile devices. Right now, if you are following my personal blog, you know I am biting myself for not ordering this, now that they have spent so much on marketing, I don't anticipate a price drop happening quickly for it. Oh well, time will still tell how this system does. Game on!

3G Bundle is the way to go

Even if you plan on never using the 3g connection, you should pick up the 3g pre-order for the Vita.  Why you ask? Because you get an 8GB memory card, a free psn game, and a free month of AT&T 3g service (a $55 value) for the low price of $300.  Since a memory card is needed anyway, and you'll eventually need to purchase a game or two, this deal is too good to pass up.  The only catch is the offer is only available at Gamestop or Amazon.

well, in Japan it is anyways. I have been watching live streams of people using it all weekend, and let me tell you, it looks amazing!! Yoshida even seems to be enjoying himself with it. It really does seem to be an all-in-one device, and I can't wait to use it for EVERYTHING!!! Only 3 more months folks, so hold on. Oh, did I mention, Uncharted: Golden Abyss is even longer than Uncharted 3!!!??? Yep, it is, over 10+ hours, can't wait!!

Alright, set aside some time to lose your PS3 for a while today, there is a new firmware update, 4.00, this is helping set up your PS3 for the ability to use remote play to play all your PS3 games on your Vita! Yes, it seems early, but you need to remember, the system comes out next month in Japan, so they need this update now.  This Firmware update will also include some more benefits for Playsation Plus members. Check out the full details here from our friends at IGN.

Details have emerged that if you are buying an imported Vita and are getting Uncharted: Golden Abyss, you will be able to change the language to English. Now it has not been confirmed if it will be audio, or just add English subtitles, or if other games will go that route. Me? I am still going to wait for February, it will be worth the wait my friends, but if you are one of the ones that ordered the import Vita, at least you will have something to play in English, after you spend the money on the memory cards, ha ha. Good Luck, and game on!

No PS One Classics On Launch

Translated from Square Enix Oceans site, it appears Famitsu has gotten confirmation that the Game Archives, which allows you to play PSOne classics, will not be available at launch for the Japanese release date that is fast approaching. Sony has however stated that there are plans for it in the future, but no exact date was given. However, there is a possibility it could be ready by the US launch? That is purely speculation by yours truly, but it is feasible as that is 2 months to get the kinks out for it and load it on for a day one update? hmmm.....

Gamestop has made a mistake that benefits us, releasing the North American prices on the proprietary memory cards on their website, and here it is broken down, so start saving, its gonna be expensive.

The details for Australian Pre-Orders of the Vita have been announced, and it appears that they will be the same as the European pre-order items you get, only of course the discount is in Australian dollars. It also appears that you don't have the wallet option, just the earphones. Still, with this announcement, I am starting to get excited that the US will hopefully get an announcement soon on our pre-order bonuses that we will have available. Fingers crossed!!!

New Screen shots!!
Our good friends over at IGN put up some great screen shots of Uncharted: Golden Abyss and Gravity Rush, I encourage you to pop over to their site and check them out! Link for Uncharted here and for Gravity Rush here

The European PlayStation Blog announced today the pre-order gift pack details for the European release of the Vita. These items include: branded headphones, and/or a cool Vita branded wallet that even has a cool storage for your memory cards and cartridges. I really hope this will carry to the US as well, because I really want that wallet. Also, you get the following:

Be sure to hop on over to the European PlayStation blog to see the pictures of the headphones and wallet here.

UMD Passport Program Announced
Sony has just announced how you can transfer some of your UMD's to Vita when the time comes. But yes, you read correctly, only SOME of your UMD's will be able to be transferred, the company has to want to participate in the program to get it to transfer, and your transfer comes with a price. Downloading the program to your PSP will be free (starting Dec. 6th), but getting it on the Vita will cost you an unconfirmed US price. Some publishers taking part in this program are: Square Enix, Sega, Capcom and Konami. While this is a very cool idea, will it be worth most of the consumers to pay for their UMD's again after there are so many great new titles for the Vita? Let's wait and see how well it does in Japan first.

Q & A on Wipeout 2048
Today the official PlayStation Blog posted a Q&A they did with Wipeout 2048, one of the many confirmed titles for the Vita. I have not been very excited about this game because of my past experiences with Wipeout. Until today. Yes my friends, they have listened to user complaints and have addressed them in a way that makes me start to change my mind about this title, and now I am highly considering it. My biggest complaint about Wipeout has always been the tracks and how narrow they are. They have now made the tracks wider, allowing racers to be able to focus more on the racing and taking out opponents and less time on maneuvering the tight tracks, highly beneficial to those of us that love the competition! Also, they have added multiple paths for tracks, giving racers multiple options to take and try and get the upper hand on their opponents, as some of the paths will give may give you more weapons or boosts that others didn't get by going down the other path. Another addition that I am excited for is that instead of one pad for offensive/defensive weapons, it will now be split up into two separate pads: offensive and defensive. These are just a few improvements that have changed my overall opinion on the game. For the full Q&A, head over to the Official PlayStation Blog here.

Check out the Link above for covers that we found from Amazon with covers of some Vita games. Some of these covers are not the official ones, but very possible the design is final. Also, the ones that have been confirmed are Japan releases, so keep in mind that the cover art can change for the North American releases, enjoy the sleek sexy look of these vita covers!!

Play The Vita One Week Early
Want the PS Vita one week before everyone else in the US? According to the Official PlayStation Blog, you can order the 3G/Wi-Fi bundle with a case, 4GB memory, and Little Deviants a week before everyone else. Now this is a good deal, however, it appears to be only the 3G model, why? Wanting more money, so I will be waiting that week to get the Wi-Fi only. Time will tell if they will make the Wi-Fi only  a bundle. If they do, I am down for sure, but as of right now, Canada is the only one with the week early Wi-Fi model.

Details on order can be found on the Official PlayStation Blog by clicking the link.

Software On The Vita
Also revealed today was some of the pre-loaded software to come with it. Although Twitter and Facebook are not on the list, both have said that they are working on Apps for the vita, which will be pretty sweet:


Seeing how this interface is going to be laid out with the circles, very interesting to me, and we will see how quick it is and how well it will hold up if more apps are released for the home screen, which is rumored to happen, although from screenshots I have seen, your games on your memory also appear on the home screen, so what happens when you get too many of those circles? hmm...