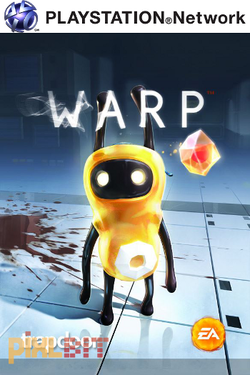 Warp is a great little puzzle game for an amazingly low price available on PlayStation Network (PSN). The game starts out with you discovering that you are a captured alien taken with your friends to an underwater facility for numerous experiments and observations. Your goal seems simple at first, you have to escape the facility, simple enough, right? Wrong. There are guards and scientists trying to prevent your escape, some of the guards are armed, but guess what? You have no weapon, instead you have great special abilities that will aid you in getting through this facility and ultimately escaping. So you may be asking yourself how you are going to get through this facility without any weapons, the answer is simple: refer to the title of this game. Warping will be on of your best friends during this game, with the ability to warp through walls, and into objects, you will be able to proficiently avoid armed guards, and better yet, if you want to kill them to prevent accidental death, just warp into their bodies and you can make them explode from the inside.   What this game lacks in size of a full retail game, it vastly makes up for the creative puzzle work to get through each level, and the interesting boss fights as you progress through the facility. You will often find yourself dying frequently in order to figure out the best way to progress through each room to get to the end safely, but dying frequently will never be a problem as it has an over abundance in checkpoints along the way to save your progress.  Another really cool feature this game has is that it keeps track of your progress and pops up with occasional leaderboards as you pass important milestones, comparing your score with that of your friends, but one flaw of it is that it will even show you PSN friends that do not have the game, making it frustrating at times that you do not have a score to beat. As  you progress through the game, you can collect grubs along the way to feed your alien and give you the ability to power up your alien to further help you in your conquest to escape the facility  and help rescue some of the other aliens within the facility. You will also learn new powers from your alien friends that will aid you in further destroying your enemies or even just avoiding them all together (I promise you that this is possible, I am currently working on doing it). After you complete the game, there is still continuous gameplay that you can do with your friends by going back to the challenges that you find in the game and try and post the highest score on the leaderboard. It is best of course if you have some friends with Warp to increase the competition to obtain top score in your circle of friends. For only $9.99 on PSN, this game is a steal for a great puzzle game that you can play over and over again, and I wouldn't mind seeing some sort of sequel or spinoff of this game, but I doubt it will happen.