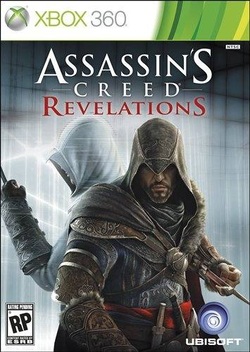 _Assassin's Creed has come a long way from where it started. When it debuted it was a masterful new take on cloak and dagger/stealth type games. It feaured a robust "Parkore" free running system that wasn't clunky and a melee combat system that relied more on timing and observation than on button mashing and stats. I thoroughly enjoyed the first game and it was one of the few games I went Achievement Hunting in (still don't have all of them, damn flags). To accent all of this fresh gameplay was a strong story and interesting characters. It was a controversial storyline that basically said all religious factions are loonies duped by people wielding "Pieces of Eden" to control a population. Despite this somewhat rage inducing thesis, the plot works well. If you are unfamiliar with the story, it boils down to this: It's Templar's vs Assassin's in a shadow game of control over the world. The Templar's seek to achieve world peace through mind domination and submission, the Assassin's seek to achieve world peace by cutting down those who opress and enabling society to make it's own path. In a round about way its a futuristic battle over slavery.

All Assassin's Creed games so far have followed the same basic plot/gameplay mechanic. You are actually Desmond Miles, escaped former Assassin captured by modern day Templar's and forced into a machine to search the memories of his ancestors for "Pieces of Eden". Wait, what did I just say? "...search the memories of his ancestors..." How does that work? In Assassin's Creed fiction, your DNA contains all the memories of your parents up to the point of your conception. The Templar's have created a machine that is allows you to virtually relive the memories of your ancestors, called the Animus. At the start of Assassin's Creed (the first one) you find out that you can't always just jump straight to a specific memory. This means that you have to relive portions of your ancestors life to achieve enough "sync" to access desired memories. It's a little contrived, but it works to frame the story. In the first game you relived the memories of Altair Ibn La-Ahad who lived during the time of the Crusades. I won't spoil the plot, because it's decent enough to warrant a play-through, even if it does grow a bit repetitive later in the game. In the end you find the location of some "Pieces of Eden" and discover that you have picked up some of Altair's abilities along the way. The game ends with the Templar stronghold you are imprisoned in under attack from Assassin's.

Assassin's Creed II, picks up right where the first left off. You are aided in your escape by an undercover Assassin who is basically an operator from The Matrix from the first game. You learn that the compound you escaped from wasn't the only group of Assassin's and soon team up with a modern day Assassin team with their own version of the Animus (which is of course better than the Templar's version). You are told that the skills you picked up from Altair is a known side effect and it's decided that the best way to retrain Desmond's Assassin skills is to find a memory of an ancestor who wasn't trained as an Assassin as a child. A suitable match is found; Ezio Auditore. Ezio is the son of an Italian noble during the end of the Renaissance era. Ezio starts out as a rich punk picking fights in the streets, but becomes a skilled Assassin through the guidance of his estranged uncle Mario. At the end of Assassin's Creed II you are introduced to the fourth, and ultimately most important, storyline: humans as we know them today are not the first inhabitants of this world. You learn that "The Ones Who Came Before" are the creators of the Pieces of Eden and are trying to prevent what happened to them, happening to the current humans.

In Assassin's Creed: Brotherhood you continue to live viciously through Ezio, but are searching for something called the Apple of Eden. Brotherhood also marks the beginning of the single city world for Assassin's Creed. The first two games were large, and expansive and had missions across multiple largish cities. Brotherhood forewent the multiple city idea and focused instead on re-creating 1800's Rome in all it's dusty glory. Ezio travels to Rome seeking revenge and to rebuild the Assassin's order. Again I'll leave the plot at this since it's worth playing through. In the end, Desmond finds the location of the lost Apple and retrieves it. Desmond then passes out and is stuffed back into the Assassin's animus to keep his mind from turning to mush.

This is where Revelations picks up. Desmond is stuck inside the Animus until he can stabilize his mind. You reclaim your role as Ezio Auditore, now in his mid 40's, searching for the Library of Altair for answers. When arrives at the old Assassin stronghold of Masyaf, he discovers that the Templar's are already there searching for the same thing. He fights his way to the library door only to learn that the keys to open it were hidden by Marco Polo's father. Ezio then sets off for Istanbul/Constantinople in search of the Polo's last trading post for clues to the key's whereabouts. The plot is better integrated this time, with side missions being accessible alongside main missions and influencing each other. This was a nice change up for a series that was starting to feel a bit routine.

Gameplay for the Assassin's Creed games has always centered around three things, Free Running, Stealth, and Melee combat. All three have been improved incrementally with each successive game, but no other area has had as much of a departure from the original than Combat. At the end of Assassin's Creed, Altair is powerful, but could still be taken down if you let yourself get overwhelmed by guards. Ezio on the other hand becomes a one man walking death tank. Yes there are more options for handling enemies, but when you have a crossbow and what is basically a 10 shot revolver at your disposal, the guards of the Renaissance are just fodder. Additionally in Brotherhood and Revelations you have Assassin trainees whom you can call at any time to dispatch any opponent you don't feel like taking on yourself. I was never really scared of the guards in Assassin's Creed II or Brotherhood since they didn't look very formidable, even the "heavy" guards and their full suits of armor. I think it had something to do with the look of the armor. There is something inherently intimidating about a helmed Crusader, and something inherently un-intimidating about a guard in pantaloons and a painters hat or bright colors. Revelations remedied this issue nicely with the guards actually looking somewhat formidable, and some of them being your equal in combat requiring a drawn out fight or clever use of your arsenal to take them down.

The other aspect of gameplay that has become lost over the last couple games is the kill setup. In Assassin's Creed, Altair had to research each of his targets in order to have a chance at taking them out and making it out alive. Ezio has to do no such research; he just charges in, takes a look around, and kills who he needs to. It makes for a bit more exciting gameplay, but I don't feel as connected with my entry/exit plan, particularly when you need to remain 100% undetected for some missions.

One of the things I was also missing over the last couple games was playing as Altair. I never really cared for Ezio as a character, and was becoming annoyed being forced to play as him for the third time. Revelations cured all of that. I now don't care about Altair and enjoyed playing as Ezio, go figure. It's possibly because the closure of Altair's story takes place over 6 short memories that play out more as interactive cut scenes than anything else. Ezio on the other hand is an aging man of the Renaissance being forced to cope with a new city and tasked with training the next generation of Assassin's. I don't know what it is that changed my opinion of Ezio, but if I had to guess it's probably because he's grown up and calmed down. Which is what I liked most about Altair's story. He was a master Assassin, but got cocky and was forced start over as a new recruit. Ezio is in a similar position in Revelations; he is a master Assassin, but in a new city amongst Assassin's who are better than him in some ways and he has to learn their skills in order to succeed.

One game element that was introduced in Assassin's Creed II and keeps getting better, are Prince of Persia style dungeon sections. These exist as collectible side missions, ultimate armor as a prize. These sections are where the game really shows it's roots. They are like little pockets of caramel in German Chocolate Cake. If they were any longer they could border on annoying, but they are varied in both length, location, and style that they are always interesting. The only downside is they are often pared with a time restriction for 100% sync, so for those of you who care about 100%ing things will either need to play through each section twice, or charge through them as fast as you can.

If you are a fan of the series it's a must play, its similar to Brotherhood in that it feels more like an over-sized expansion pack or DLC than a whole new game, But it wraps up the Ezio story nicely and Altair's story conclusively while paving the way for next game. Constantinople is a nice change of pace from Italian visas of Assassin's Creed II and Brotherhood, and the new cast of characters are interesting and engaging.

Overall: 8/10
A good return to form for the series, but left me feeling like there should have been more to it.